Not to Be Confused with Kip HackmanThe toughest cases, require the toughest agent of them all. That’s when they send in Burt Macklin. He’s the no-nonsense, ultra-tough, mega-smart, most-handsomest operative in the FBI. He may have been accused of stealing the president’s rubies and his relationship with Janet Snakehole might be a tad bit scandalous, but make no mistake. When Burt Macklin is on the case, there will be results of some kind. Also, don’t confuse him for his less successful and eerily similar brother, Kip Hackman. He just doesn’t have the same amazing track record as Burt Macklin!If you want to become the greatest agent in the history of the Bureau, then you want to be Burt Macklin. The good news is that this Parks and Recreation Burt Macklin Costume makes it easier than ever to become him!Design & DetailsBecoming a special agent takes a lot more than just throwing a jacket on and making up a fake name for yourself… okay, so maybe that is all that it takes! Lucky for you, this costume set comes with said jacket, along with the other components you need to transform into the greatest agent in the world. The navy blue jacket has buttons along the front. The shirt is a button-up style and comes with a maroon and gold striped tie to recreate the look from the show. This set also comes with a Burt Macklin nametag, which is necessary for intimidating would-be hostile suspects (like Greg Pikitis). Finally, the set comes with a pair of sunglasses to put the finishing touch to the outfit. You’ll be ready to track down Pawnee’s greatest villains in no time.Johnny Karate Needs Your HelpWho will solve the next big mystery on the Johnny Karate Show? When you have this officially licensed costume, you will… as the one and only Burt Macklin! 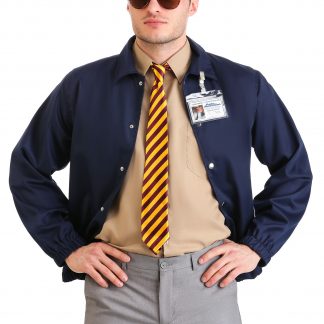