Prince Vegeta?Now, at first glance, Vegeta may seem like a ruthless and arrogant jerk… and that isn’t totally wrong. But, if he’s ruthless, it was only because he was forced to be by the evil android Frieza. Once that dude got out of the way, things were much easier to show his real… compassionate side? Alright, maybe that’s going way too far. He’s always going to be interested in pounding his foes into dust. But, that comes with the territory when you’re defending the whole universe from monstrous enemies like Buu and even Gods of Destruction!And if he’s arrogant, well… that one’s true. But, it’s not easy being a Saiyan prince. All of that fighting eventually takes its toll on even the hardiest warriors. You’ll never hear Vegeta say that. He loves every second of it and aspires to become the most powerful warrior in the universe! A claim like that kind of requires just a hint of arrogance. So it goes without saying that if you want to look that hardcore, you’ll need to suit up.Design & DetailsEnjoy bringing the fun of the Dragon Ball Z multiverse to life when you climb into our officially licensed Vegeta costume. This complete ensemble is designed to make you look just like the mighty warrior in his battle armor. This blue getup is a jumpsuit with a muscular padded vest that replicates his silver and gold chest armor. (Gotta do something to absorb all those kicks to the stomach, right!?) Boot covers and gloves have you battle ready for anything!The Jerk We All Love!Try not to get too cocky when you’re wearing this fierce costume, because you may feel like the real Vegeta! (Remember, it’s fit for a prince!) Add our matching Vegeta Wig, and your power will always be over 9000! 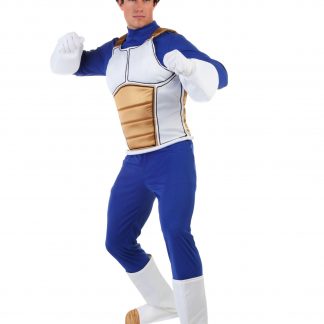