Beats SymbiosisTons of people have bonded with the Venom Symbiote. Sure, it sounds really cool, but it’s really more trouble than it’s worth to bond with a REAL Symbiote. After all, it turned Peter Parker into a crazed maniac, it sort of ruined Eddie Brock’s life, and Mac Gargan ended up in prison after his stint with the Venom Symbiote. Still, we got to hand it to Venom… that suit of his is one awesome looking costume! If only there was a way to get Venom’s looks without all the nastiness of being bonded to a Symbiote…Oh, hold on a second! We’re experts in the realm of costumes! It just so happens that we have an amazing Venom costume based on his many appearances in the Marvel comics. And the best part? You never have to go near a real Symbiote!Product DetailsThis officially licensed Marvel Venom Costume is an adult costume that lets you transform into the notorious Spider-Man villain. It comes with a full-body jumpsuit that has a wet-look finish to recreate the Symbiote’s viscous look. It fits with a zipper in the back, making it easy to change into in an instant! The chest and arms have muscle padding inside, which gives you the chiseled physique of Eddie Brock. Of course, the white spider symbol is sprawled out on the front to solidify your new identity as Venom. The gloves also feature a matching black wet-look finish. Finally, to tie the whole look together, the costume comes with a molded latex mask that’s shaped like Venom’s frightening face. It even has a long, molded tongue that dangles down in front. Once you have it on, you may just feel like picking a fight with Spider-Man!We Are VenomOkay, we do have to warn you that there is one tiny thing you have to do when you first put this Venom costume on. It’s required that you say, “We are Venom!” 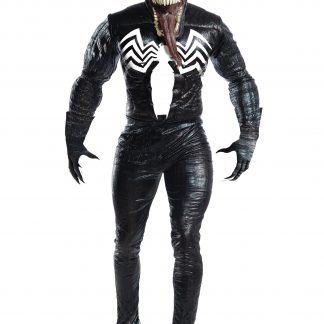