Oh the bravery of a matador. He dresses in the bright gold, silver, and red colors flourishing his fancy ensemble, flashing steel blade, and bright scarlet cape before the great bull in front of him. It is a true symbol of the fight between man and beast. Let us not forget the unique hat that adorns his head. Although not quite as intricate as the rest of their outfit, the hat is actually sometimes given away to someone after the fight as a symbol of respect and honor. There’s even a little more symbolism than that. The knob-shaped sides represent the bull’s horns, and the circular indentation on the top symbolizes the bull’s eye. You didn’t know you’d get a culture lesson when choosing your costume–did you? Nowadays for us it’s mostly just a silly hat that will complete your fantastic matador outfit without having to harm (or be harmed by) a single bull! They can hang out in the pastures for a little bit longer while you show off your killer paso doble moves at the next dance party. 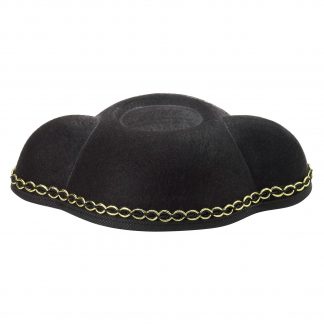