Folks like the rave about the 50s. Immortalize the 60s. And everyone wishes they lived through the 70s. But you know what we think? The 80s are where it’s at!OK, so maybe the 80s didn’t have hordes of hippies making political waves or disco dancing ‘til the wee hours, but it had amazing video games, gigantic cell phones, sweet side ponytails, insane aerobics routines, and one or two pretty stellar pop stars of its own. The 80s were bright neon colors and geometric prints. The 80s were full of spandex and cute Hollywood heartthrobs (sometimes together!). The 80s were–well, we’re guessing if you’re here staring at this Adult 80s Pop Party Costume, then the 80s were your decade. And you know they were bomb.If you need a dramatic outfit to wear to your pal’s 80s party, don’t join a boy band! Just express yourself in this fun and funky black dress with its colorful accents and striped pink tulle skirt. The little lace glovettes and headband add just the right touch to make this outfit totally legit. And since you know as well as we do that the 80s were not about restraint, load your wrists up with plenty of DayGlo bangles and slap bracelets for an eye catching way to accessorize. The 50s may have had the King and the 60s its own floppy haired boy band, but we think the 80s had a brighter star: you! 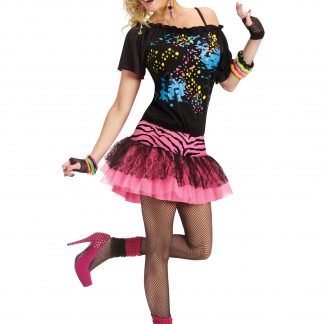